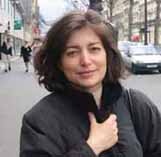 was born in Ismailia, Egypt, into a Lebanese French-speaking family. She is a novelist, translator, actress and documentary filmmaker. She was awarded the Prize of Five Francophone Continents for her first novel in 2001 and has won several awards for her acting. She has been living in Paris for the last ten years.