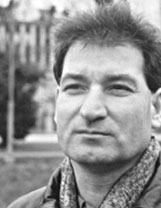 was born in Iraq in 1960. He studied acting and theatre direction in Baghdad. He has published four collections of poems; his first, Al-’Atil ’An al-Wardah, for which he won the Yusuf al-Khal Prize for Poetry, was published in 1988 in London. He lives now in Sweden.