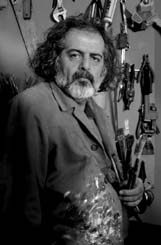 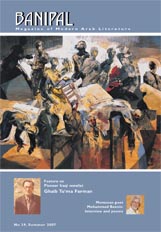 is a painter, photographer and set designer. Born in Syria in 1958, he graduated in Visual Communications from Damascus University’s College of Fine Arts in 1981. He then studied in Paris and in 1987 graduated from the Ecole Nationale Superieure des Beaux Arts.

Between 1989 and 1996 he was a professor at the College of Fine Arts, Damascus University. His first solo exhibition was in 1981, since then he has shown in Syria and many countries and cities worldwide, including in Dubai, Cairo, Paris, Istanbul, Bahrain, Kuwait, Austria and Germany.

He has taken part in group exhibitions in Cairo, Geneva and Sharjah. In Germany in 1988 he was awarded first prize in the Kiel International Poster Competition and in Munich won the prize for Best Foreign Poster.

Moualla is known also for his many achievements as a graphic designer and calligrapher, and has created innumerable movie posters, book covers and advertising campaigns. He has been the cinography designer for many productions of the Syrian National Theatre, as well as a number of films and several television drama series.

He writes in Arab periodicals on literary and cultural issues. In 1999 Moualla was awarded top prize at the Lattakia Biennale. He has served as a jury member for many plastic arts, graphic and photographic festivals.