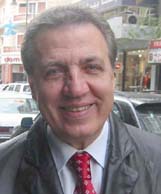 was born in 1951 in southern Lebanon. He studied Arabic language and literature at the Lebanese University, Beirut, and from 1973 to 1989 worked as a teacher, since then in the Ministry of Information. In 1972 he was awarded a prize for his poetry.  He has published 11 poetry collections, among them The Rose of Sorrow, Epic of Dust, Lonesome and Early Desires. In 2004 he was awarded the Bashrahil Prize for Poetry.