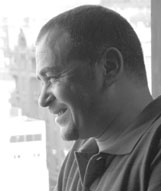 was born on 1 October 1970, in Giza, Cairo. He has a degree from Cairo University in Philosophy (1996). Since 1990 he has published several short stories and articles in the Arabic press, as well as writing and directing three plays. He is presently director of the research department of the Cairean Culture TV channel.

Sehrun Aswad [Black Magic], excerpted in Banipal No 26 and translated by Humphrey Davies (Summer 2006), is his debut novel, published by Merit in 2005, and winning the Sawaris Prize. Black Magic is now published by AUC Press.  His second novel Ladhdhat Sirriyya (Secret Pleasures) was published in 2008.