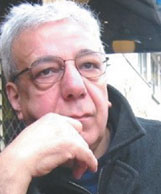 is a poet born in Baghdad in 1944. He settled in France after living in London and Vienna and in 1973, in Paris, he founded the first surrealist Arabic review, Le Désir Libertaire, which was banned in the Arab world. He has published many collections of poetry and essays, translated a number of European and American poets – works of Miroslav Hulob, Paul Celan, Rene Daumal, Joyce Mansour, Max Jacob – into Arabic and published anthologies of modern Arabic poetry in French. He edits the poetry magazine Arapoetica and works as a journalist.