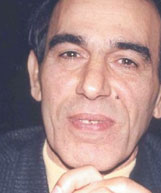 was born in Iraq in 1948 and left the country in 1977. He works as a journalist for As-Sharq al-Awsat newspaper in London. He has translated The Bluest Eyes by Toni Morrison into Arabic and poetry by more than twenty-five British poets, including R. S. Thomas, Ted Hughes, Kathleen Raine, Philip Larkin, Dylan Thomas and Kingsley Amis. He is Secretary of the Union of Iraqi Writers and Journalists in UK.