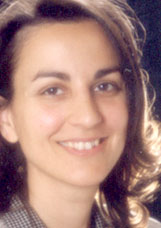 was born in New York, completed high school in Amman, Jordan, and now lives in Southern California. In 1992 she obtained an MA in Comparative Literature from UCLA. She is an accomplished poet and translator. Her translations have appeared in the journals Mediterraneans, Passport, Prairie Schooner, Painted Bride Quarterly, Banipal and others.