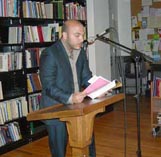 teaches contemporary Middle Eastern culture and literature, media, film, and Arabic and European intellectual history at New York University. He has a BA in Philosophy (AUB, 1994), an MA in Film Studies (University of Rochester, 1997), and a PhD in Comparative Literature (Cornell University, 2004).