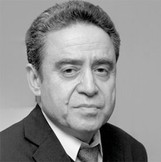 Luay Abdul-Ilah is an Iraqi writer, translator, journalist and essayist, born in Baghdad in 1949 and graduating in Mathematics from Baghdad University. His three collections of short stories published include Al-Aboor ila al-Dhifa al-Ukhra [Crossing to the Other Bank], 1992, and Ahlam al-Video [Video Dreams], 1996, and he also has a novel, Divine Names, now in English translation. He has worked as a full-time translator for Al-Sharq Al-Awsat newspaper, and has been a visiting lecturer in Arabic at the SOAS Language Centre and University of Westminster since 1999. He has lived in London since 1985. He is interviewed about his novel in Banipal 61 – A Journey in Iraqi Fiction by Valentina Viene.