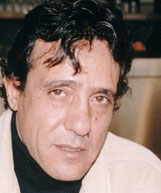 is a Palestinian poet, born in 1954 in Beit Jala, near Bethlehem. He lived in Amman from 1967 to 1979 before moving to Beirut. Between 1982 and 1986 he lived in Tunis and is now living in Ramallah. He has published several collections of poetry and a novel and made two documentary films. He is editor-in-chief of Al-Shuara [The Poets] quarterly, published by the House of Poetry, Ramallah, of which he was co-founder in 1998.

He is director of the literature and publishing department of the Palestinian Ministry for Culture, also editor of the literary supplement of Al-Ayyam daily newspaper in Ramallah and editor-in-chief of the poetry quarterly Al-Shou’ara (The Poets). He has published a number of poetry collections, and his first novel in 1995. His poetry abounds with luminous imagery, ranging in topics from life and death to the particular themes running through contemporary life. He is regarded as one of the most significant and innovative of Palestinian poets writing today.

Selected poems have been translated into English and French. His first collection in English translation, Like a Straw Bird It Follows Me, was published in 2012 by Yale University Press (USA and UK), translated by the award-winning poet–translator and fellow Palestinian Fady Joudah. Poet and translator are launching the book with tours in the USA (October 2012) and the UK (late October, early November).

Some of the poems published in translation in Banipals 12 (2002) and 15/16 (2003) are published on the website of the Khalil Sakakini Cultural Centre in Ramallah, in a collaboration between Banipal and the Centre. To read them, click here.