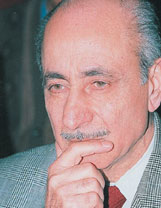 Fuad al-Takarli was one of Iraq’s pioneering fiction writers. Born in Baghdad in 1927, he graduated in Law from Baghdad University in 1949 and worked in the Justice Ministry, becoming a judge in 1956. He later headed the Baghdad Court of Appeal. He studied Law in Paris between 1964-66, and on his retirement in 1983 took up full-time writing.

Since 1951 he published a number of short stories, one-act plays and three novels, but came to prominence with the powerful novel Al-Rajea al-Baeed, The Long Way Back, published in Arabic in 1980, in a French-language edition in 1985, and in English translation by Catherine Cobham in 2001.

Set over the last years of Abd al-Karim Qassim’s regime and ending amid the violence of his overthrow by the Baathist forerunners of Saddam Hussein in February 1963, The Long Way Back is an audacious and authentic chronicle of generations of an Iraqi family in Baghdad as they deal with “the tangled complications of life, trying to explain the inexplicable, engendered feelings of anxiety and depression”.

Fuad al-Takarli started writing The Long Way Back on 9 February 1966, when he was studying law in Paris, the events of 1963 still very much to the fore. He completed it on 5 September 1977 in Baghdad, writing a postscript which almost asks the reader to throw away the book – or to keep schtum, to see nothing, to say nothing, that very usual state of affairs that Iraqi citizens knew all too well: “This mass of pages does not contain what people believe it does. No sighs, no talk, no groans or smiles. No sublimity, suffering, fear, or desire. No eyes, lips, blood or tears. If they are thrown away they will not protest. They are dumb pages which are neither harmful nor beneficial, and it is better for them and for everyone if they are left in peace and forgotten.”

In her introduction to the novel Catherine Cobham wrote that when Fuad al-Takarli first tried to get the novel published in Iraq, the censor demanded that the Baathist character Adnan be entirely erased. Al-Takarli therefore turned to Beirut where the complete novel was published in 1980 by Dar Ibn Rushd – and sold inside Iraq without the censor noticing. In 1993 a second edition was published with its Iraqi colloquial dialogue simplified at the request of the publisher to ensure a wider readership.

In 2000 Al-Takarli was awarded the prestigious Owais Prize for the Arabic novel.

An excerpt of his novel Khatam al-Raml [Ring of Sand], published by Dar al-Adab in 1995, was excerpted in Banipal 14 as part of the feature "Six Iraqi Novelists". To read this excerpt online click here.

Since 1990 he lived mainly in Tunis, and in the last three years in Amman, where he died of pancreatic cancer. He is survived by his second wife, their son, and three daughters from his first marriage.