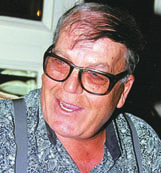 (1934-2006) poet, playwright and columnist, was born in al-Salamiyaa of Syria in 1934. He is a pioneer of Arabic non-metric free verse and his poetry, written in the ’60s and ’70s while in exile in Beirut, was profoundly influential. He published three poetry collections, two plays, a novel and two collections of satirical articles. He died on 3 April 2006 as we were going to press on Banipal No 25. The influence of al-Maghut’s innovative and lyrical poetic style (in his just three collections) on generations of Arab poets since the late 1960s has been phenomenal. Little known in the West, al-Maghut is almost a household name in the Arab world. Banipal paid tribute to him through the words of his fellow poets on the day he died, 3 April.

“This poet, who wrote the most beautiful prose poems by chance and who established, unknowingly, an entire school of poetry, is the poet of the future as much as he is the poet of reality and contemporary times. His poetry came from having lived it and from life itself. From the bitterness of solitude, from the fear he discovered early on in prison and from the street where he learned a great deal.”

“We were at the beginning of our poetic and actual lives, crossing sidewalks and streets in various Arab and non-Arab cities. We were full of the shadows of upheavals and rebellions on all levels. Al-Maghut’s poetic dish was the closest to that dreamy wandering and suffocation and disillusionment with the reigning world. He was, with his sarcastic tone and bleak outlook, the closest to our imagination, poetic memory and to the climate of Arab reality and its aborted dreams.”

“No one can speak about his death and comment on his departure from this world like himself . . . He would have been taken over by a smile and his unique bitterness before shedding a tear. Astonishment would have been his first reaction, that very same astonishment which filled him and filled his poetry and plays . . . He had sent it beforehand to those of us in Shi’r . . . As for his legacy, it is a tree no one can cut down and will be evergreen. I see it green right now with many shades and Mohammad sings high above and leads the orchestra as he wishes!”

(See Banipal No 13, Spring 2002 for a selection of poems of Mohammad al-Maghut)