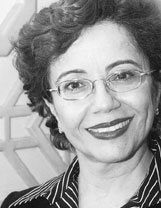 Ghalia Kabbani is a Syrian writer. She spent her childhood in Kuwait, leaving after the invasion in 1990.

She has worked as a journalist since 1979 and is currently a columnist at Al-Hayat newspaper.