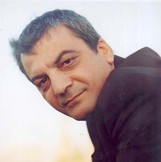 With great sadness we report that Bassam Hajjar died of cancer on 17 February 2009.

Born in Sûr (Tyre), Lebanon, he became a philosopher and a poet – with a Diploma of Advanced Study in Philosophy from the Sorbonne, Paris. Bassam Hajjar worked as cultural editor on the Lebanese daily newspapers An-Nahar and Al-Safir and later for Al-Mustaqbal in Beirut.

Since 1980 he published ten collections of poetry. He was also a prolific translator from the French of novels, poetry collections and books of philosophy and literary criticism.