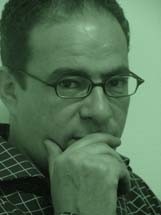 was born in September 1967 in Mansourah, Egypt and spent a good part of his childhood in Oman. He has a BA in Business Administration (1991). Since then he has worked as a journalist, and is currently with Al-Ahram newspaper. His fiction has appeared in many literary and cultural periodicals, and he has published two short story collections and two novels. Banipal will be publishing an excerpt from his second novel Ibtisamat al-Qiddiseen [The Saints’ Smiles].