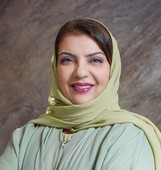 Bushra Khalfan is an Omani short story writer and novelist, born in 1969. She has been writing short stories, novels and articles for a quarter of a century.

From 2002 to 2011, she wrote a weekly article for the Omani Al-Watan and Al-Ru’yanewspapers, and she currently writes for the Oman paper. Her collection of open texts, Dust (2008), was awarded the Omani Writers’ Association Prize.

From 2010 to 2012, she was head of the Literature and Creativity Committee at the Muscat Cultural Club. In 2014, she founded the Omani narrative laboratory and has run it since then.

Her novel Dilshad is shortlisted for the 2022 IPAF, and is excerpted in. the Banipal 73 feature on the six shortlisted novels.