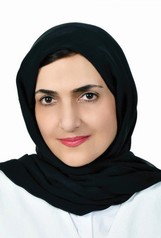 Reem al-Kamali is a novelist, writer and researcher from the UAE, born in 1972. She is an editor of the cultural section of the Emirati Al-Bayan newspaper.

Her published works include the novels The Sultanate of Hormuz (2013), which was awarded the Owais Prize for Creativity in 2015, The Statue of Dalma (2018) winner of the Sharjah Award for Arab Creativity, and Rose’s Diary (2021).

In 2015, she took part in the writers’ workshop (Nadwa) for talented young writers organized by IPAF, where she worked on The Statue of Dalma. Reem al-Kamali studied history at university and is fascinated by archaeology, art, myths and culture in general.

Her novel Rose’s Diary is shortlisted for the 2022 IPAF, and excerpted in the Banipal 73 feature on the six shortlisted novels.