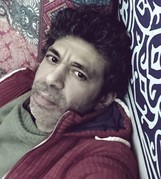 Tareq Imam is an Egyptian novelist and journalist, born in 1977. He is deputy chief editor of the Radio and Televisionmagazine in Cairo. He began writing at a young age, publishing his first collection of short stories, New Birds Unspoiled by the Air, at the age of eighteen.

He has published eleven books of novels and short stories, including The Calm of Killers (2007), The Second Life of Constantine Cavafis (2012), My Father’s Shrine (2013), The City of Endless Walls(2018) and The Taste of Sleep (2019). In 2010, he took part in the writers’ workshop (Nadwa) for talented young writers organized by IPAF.

His novel Cairo Maquette is shortlisted for the 2022 IPAF, and excerpted in the Banipal 73 feature on the six shortlisted novels.