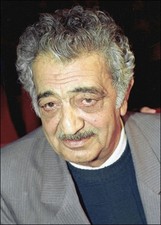 Emile Habiby was a writer and politician born in Haifa, Mandatory Palestine, in 1922. Active in the Palestine Communist Party and its later Israeli configurations, he served as a member of the Knesset from 1951-1972.

He was a co-founder and editor of Al-Ittihad, Israel’s longest continuously published Arabic-language newspaper. His form-bending literary works, particularly his satirical novel The Secret Life of Saeed, the Pessoptimist, earned him a reputation as one of the Arab world’s most innovative modern authors.