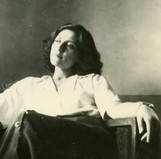 Maryam al-Mulla (Baghdad 1927 – 2013) was born in the ʻAbbas Afandi neighbourhood in Baghdad. Her father, Ibrahim Yaʻqub Rahmin Mulla was known as a poet in the vernacular and he inspired her to compose such poems herself. She studied at the governmental schools Mutawasittat al-Rusafa and al-Iʻdadiyya al-Markaziyya li-l-Banat but could not complete her studies following the death in 1940-1941 of her father and two of her three brothers.

In the mid-1940s, al-Mulla started to publish short stories in magazines such as al-Musawwar (The Illustrated), al-Fatat (The Girl), and al-Siyasa (The Politics). She worked at the schools of the Jewish community, especially at Frank ʻAyni and Shammash schools.

In 1948, she married the journalist Salim al-Bassun (1927-1995), who shortly after their marriage was expelled for some months to the town of Badra on the Iraqi-Iranian border after he published an article against the government. As Arab-Iraqi patriots identifying with Iraqi national causes and Arab culture, they were by no means Zionist and refused to join the mass emigration to Israel during the early 1950s. They considered themselves an integral part of the local Arab society and tried to improve that society as part of universal civilization.

In October 1973, however, the political situation in Iraq following the escalation of the Israeli-Arab conflict left them no option other than leaving their homeland and emigrating to Israel. After their emigration, al-Mulla continued to publish her literary works in Israeli Arabic journals and newspapers as well as for the governmental radio in Arabic.

During the last years of her life, she republished most of her stories and poems on the internet.2 According to her daughter Niran Bassoon-Timan (Niran al-Bassun, b. 1958), presently the Director of the Iraqi Cultural Forum in London, a collection of the stories will be published in the near future.

One of al-Mulla’s most well-known literary works is the story “Ma’satuhu Mathal” (His Tragedy, a Proverb) – translated into English for the first time and published in Banipal 72 Iraqi Jewish Writers – which deals with the relationship between the sexes in traditional Iraqi society. The story, written in fusha (standard literary Arabic) with the dialogue sometimes in ‘ammiyya (colloquial language), starts with a popular Iraqi proverb that the protagonist, ‘Amir, used to recite tens of times every day: illi yidri yidri wailli ma yidri hafnat ‘adas (He who knows, knows and he who doesn’t know, a handful of lentils). This proverb, known in various versions, is generally used when something significant is concealed behind something trivial or less important. The story was published in al-Musawwar (Baghdad) in 1951 (precise issue and date are not available); republished in Shmuel Moreh, al-Qissa al-Qasira ‘Inda Yahud al-‘Iraq [Short Stories by Jewish Writers from Iraq], Jerusalem: Magnes Press, 1981, pp. 176-178.