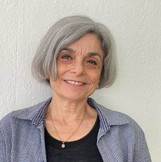 Mona Yahia was born in Baghdad in 1954, and escaped with her family to Israel in 1971. She studied psychology at Tel Aviv University and fine arts in Kassel, Germany.

Her first novel, When the Grey Beetles Took over Baghdad, (Halban Publishers, London, 2000) won the Jewish Quarterly Wingate Prize for Fiction in 2001 in London, and is published in German and French translation.

Her latest publication, Snapshots: Istanbul Behind Closed Doors (Binooki, Berlin, 2019, in English, German, and Turkish) consists of a series of photographs of a historical khan in Istanbul, the architectural structure of which is transported into that of a short story.

She is currently working on the last stages of a new novel, Four Days, a family saga of four generations of a Jewish Arab family that spans the 20th Century and is set against the backdrop of the changing map of the Middle East.