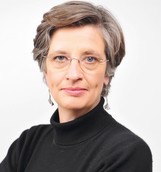 Barbara Haus Schwepcke is the founder of Gingko as well as the chair of its board of trustees.

After receiving her doctorate from the London School of Economics and Political Science (LSE) she worked as a journalist (for ZDF German Television and the Süddeutsche Zeitung), as publisher of Prospect Magazine and as an editor for the Harvill Press.

In 2003 she founded Haus Publishing.