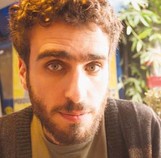 Shadi Rohana, born in Haifa in 1985, is a Palestinian academic and literary translator based in México City, translating between Arabic, Spanish and English.

He has introduced and translated a number of Latin American authors from Spanish to Arabic, as well as speeches and declarations from the EZLN in Chiapas. The Arabic translation of José Emilio Pacheco’s Las batallas en el desierto (Palestine, 2016) was his first novel-length work.

He graduated in Latin American Studies from Swarthmore College, USA, and has an MA from the National Autonomous University of Mexico (UNAM). He is currently a full-time faculty member at the Center for Asian and African Studies at El Colegio de México, where he teaches Arabic language and literature.