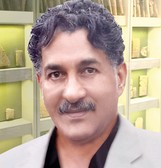 Mohamed Hayawi was born in al-Nasiriyah, Iraq. He was a journalist on the al-Jumhuriya newspaper and later a  war correspondent for several newspapers and Agencies. He published three novels before leaving Iraq in 1992. Since 1994 he has lived in Holland, where he studied Graphic Design and Print Production, worked as a film critic, and wrote two more novels, the latest  entitled Bayt al-Sudan. It is excerpted in Banipal 61 – A Journey in Iraqi Fiction.