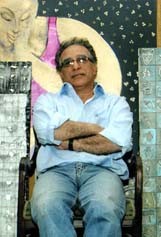 Adel El-Siwi is an Egyptian painter and translator of Italian poetry into Arabic. Born in 1952 in Beheira, Egypt, he studied medicine at Cairo University (1970-1976) and and also studied at the faculty of fine arts 1974-1975. He lived and worked in Milan during the 1980s decade before moving back permanently to Cairo, where he continues to live and work.

He has had numerous solo shows in many different countries, and has participated in many group shows as well as in Bienniales in Cairo, Sharjah and Venice.

El Siwi has translated into Arabic many texts by artists such as Leonardo da Vinci and Paul Klee, as well as the complete works of Italian poet Guiseppe Ungaretti, for which he was awarded the Mediterranean Prize for Translation of the 2007 Cairo International Book Fair.