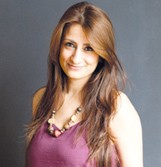 Widad Nabi is a Syrian Kurdish writer and poet, born in 1985 in the Syrian city of Kobani. She graduated from the College of Economics and Commerce, University of Aleppo.

She has two poetry collections, published in Aleppo, 2013, and in Beirut, 2016. Many of her poems have appeared in literary journals and in anthologies in German, French, Turkish, and English translation.

She has participated in several German literary festivals, including the 2017 Berlin Poetry Festival. She lives in Berlin.