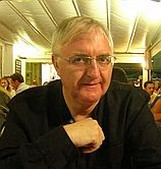 Peter Bush is an award-winning literary translator from Spanish, Catalan, Portuguese and French. His recent translations into English are Joan Sale’s Winds of the Night and Prudenci Bertrana's Josafat from Catalan and Jorge Carrión’s Bookshops and Carmen Boullosa’s Before from Spanish.

He was born in Lincolnshire in the UK, and graduated from Cambridge University in Spanish and Portuguese.  He was Director, for a few years, of the British Centre for Literary Translation, and a Professor of Literary Translation at the University of East Anglia, and for a number of years lived in Barcelona working as a freelance translator.

He edited, with Susan Bassnett, The Translator as Writer (Continuum, 2007)

For more, check out the interview with Peter Bush in April 2016 by BookBlast here, and an interview in New Spanish Books here