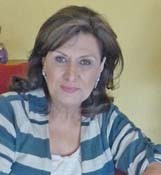 Laila al-Atrash is a Palestinian novelist, born in Beit Sahour, east of Bethlehem, in 1948. Her novels and short stories have been translated into several languages, including English, French, Italian, Korean, and Hebrew, and have been added to university curriculums in Jordan, France and America.

In 2007, she helped to establish the ‘Library of the Family’ and ‘Reading for All’ projects in Jordan, and her social and cultural programmes have won numerous prizes at television and radio festivals. In the 2015 Human Development Report, she was among a small number of women writers who were deemed to have been influential in their societies.