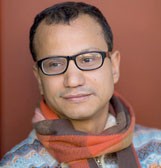 Muhammad Abdelnabi is an Egyptian writer, born in 1977. He obtained a BA in Languages and Translation from the English and Simultaneous Translation Department of Al-Azhar University and currently works as a freelance translator. He has published five short story collections, a novella titled Imprisoned Phantoms (2000) and two novels: The Return of the Sheikh (2011), which was longlisted for the 2013 International Prize for Arabic Fiction, and In the Spider’s Room (2016), shortlisted for the 2017 IPAF and excerpted in Banipal 58 – Arab  Literary Awards.

He publishes creative writing, criticism and translations in a number of newspapers and websites, and since 2009 he has taught creative writing in a workshop called The Story and What Is In It.

On 6 November 2019 Muhammad Abdelnabi was awarded the French Prize for Arabic literature for his novel In the Spider's Room, translated by GIlles Gauthier and published by Actes Sud/SIndbad. The annual prize wasa established in 2013 by the Institut du Monde Arabe and the Jean-Luc Lagardère Foundation.