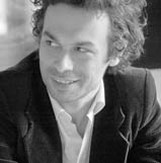 Tom Van de Voorde was born in Ghent, Belgium in 1974. He is a writer, curator of interdisciplinary projects and translator of American poetry into Dutch. In 2008, he published his first book of poetry, a collection of “contemporary landscape” pieces, entitled Vliesgevels filter (Curtain walls filter). In 2013 his second collection Liefde en aarde (Love and earth) was awarded the tri-annual poetry prize of East Flanders, with selected poems translated into ten languages and in 2016, the full collection was published in Swedish translation by Ramus Forlag.

A collection in Arabic translation is forthcoming from Almutawassit Press. In 2010, Tom was appointed curator for literature programmes at the Centre of Fine Arts, BOZAR, in Brussels. His poems feature in LITERATURE FROM FLANDERS, the guest language feature in Banipal 57.