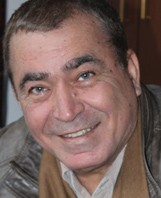 George Yaraq is a Lebanese novelist, born in 1958. He has worked as an editor and freelance writer for several Lebanese newspapers and magazines, including Al-Nahar, Al-Liwa’, Al-Hayat, Al-Sayyad, and Jasad. His first novel, Night, was published in 2013. His second novel, Guard of the Dead, is shortlisted for the 2016 IPAF.