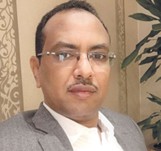 Hamed el-Nazir is a writer and journalist, born in Sudan in 1975. He currently works as a journalist in the newsroom of Qatar Television and writes for a number of newspapers and websites. Previously, he was a presenter on the Sudanese Shorouk channel, the Sudanese Blue Nile channel and Sudan radio, and was a news correspondent for MBC in Sudan.

His first novel, Farij al-Murar (2014), won the Sharjah Award for Arab Creativity, and the Qatar Vodafone Prize for the Novel, both in 2014.

His novel Nubuat al-Saqqa (The Waterman’s Prophecy), excerpted above, was longlisted for the 2016 International Prize for Arabic Fiction.