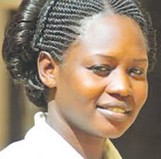 Stella Gaitano was born in Khartoum in 1979 into a South Sudanese family. She graduated in pharmacy from Khartoum University. She writes short stories in Arabic and has two collections, Wilted Flowers (Azza Publishing) and Homecoming.

She twice won the Professor Ali El-Mek Award, in competitions organised by the French Cultural Center in co-operation with  Al-Ayyam newspaper in 2001 and in 2004 – for her works "A Lake the size of a Papaya" and "Everything here Boils, published in two parts, and for "Towards Prisons", respectively.

She had to relocate to South Sudan in 2012 when the country was partitioned.