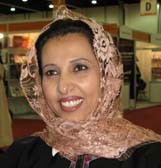 Badriya al-Bishr is a Saudi Arabian writer, born in Riyadh in 1967. She has a PhD (2005)  in Arts and Sociology from the Lebanese University, and was an Assistant Professor at Al-Jazeera University, Dubai.

She also writes a column in Al-Hayat newspaper. She has three novels (2005, 2010 and 2013), the last of which, Love Stories on al-A’sha Street, was longlisted for the International Prize for Arabic Fiction in 2014, and excerpted in Banipal 54. She has also published three collections of short stories.