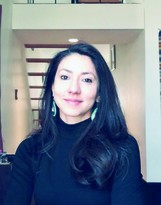 Huda Fakhreddine is Assistant Professor of Arabic literature at the University of Pennsylvania. She holds an MA in English literature from the American University of Beirut and a PhD in Near Eastern Languages and Civilizations from Indiana University, Bloomington.

She is the author of Metapoesis in the Arabic Tradition (Brill, 2015), which expands the study of metapoesis to include the Abbasid age in Arabic literature. She is the co-translator of the poetry collection of Jawdat Fakhreddine Lighthouse for the Drowning (BOA editions, 2017) and his selected poems in The Sky That Denied Me (University of Texas Press, 2020).

Her book The Arabic Prose Poem: Poetic Theory and Practice is forthcoming from Edinburgh University Press. Her work focuses on modernist trends in Arabic poetry and their relationship to the Arabic literary tradition and she is interested in the role of the Arabic qasida as a space for negotiating the foreign and the indigenous, the modern and the traditional, and its relationship to other poetic forms such as the free verse poem and the prose poem.