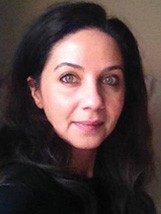 Dima al-Choukr is a Syrian critic and translator, born in Damascus, 1972. She writes articles for the Arab cultural press.

Her debut novek Ayna Ismi? (Where's My Name), published by Dar al-Adab in 2021 (240 pages), is excerpted in Banipal 73 and also reviewed in the same issue by Katia al-Tawil.  The historical novel was longlisted for 2022 International Prize for Arabic Fiction.

In the field of literary criticism, she has published Prosody, Past and Present and Arabic Prosody in the 13th Century (Post Al-Khalil ibn Ahmad), co-written with the French researcher Bruno Paoli. She has also translated French works into Arabic, including In Praise of Borders by Régis Debray and The Mirror of Damascus by Jean-Pierre Filiu.