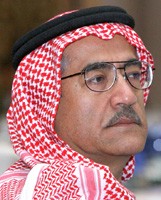 Mohammad Obaid Ghubash was born in Dubai in 1950. He has an MA in Business and Philosophy from Schiller International University, UK, and a PhD in Philosophy of Political Sciences from the University of Wales, UK. He has worked as editor-in-chief for many papers and magazines, including Al Azmina Al Arabia, after spending a year as counselor in the UAE permanent office at the United Nations in 1975. From 1994-2004 he was professor in political sciences at UAE University.

He has one novel Mazon (2000), which was earlier serialized in Al Azmina Al Arabia, a work in English on the establishment of the UAE, and his latest, a travel book, Ghafwa Inda al-Thi’ab (Sleeping among Wolves), from which three of the tales were translated and published in Banipal 51 – New Fiction. In his spare time, Ghubash was president of United Arab Emirates Chess Federation (UAECF) 1977, 1986 and 1995; and in 1994 was deputy chairman of United Arab Emirates Chess Federation (UAECF).