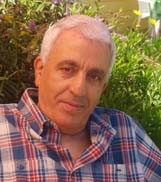 Abdelkader Chaui was born in October 1950 in Bab Taza, Morocco. After graduating in Philosophy and Arabic Literature Abdelkader Chaui worked as a teacher in Casablanca until he was arrested for political reasons in November 1974. In 1977 he started a 20-year prison sentence, having been accused of taking part in a coup to topple the regime and belonging to a banned political party. He was finally released at the end of 1989. He is the author of six novels and seven other works on politics and philosophy, and publishes his works in the Moroccan and Arab press.

Chaui began to publish his writing in 1968 in Moroccan and Arab newspapers and magazines, and joined the Moroccan Union of Writers in 1970. He wrote his first novel kana wa akhawatiha (Kana and her sisters) in 1986 while he was in prison. When he was released in 1989, he published his second novel, dalil al-’unfuwa. In 1999 he won the Moroccan Book Prize in the fiction category for his fourth novel, assahah ash-sharafiyah. In 1991 he launched the magazine ‘Ala Laqal (At Least), and after it was banned he launched the newspaper al-Mawjah (The Wave) in June 1993 and then al-Akhbar (The  News) in 2003. He has also translated works from Spanish to Arabic. He is at present the Moroccan Ambassador to Chile.