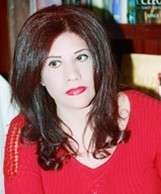 Soheir el-Masadfa is an Egyptian poet, novelist, translator and scholar, and has a PhD in Philosophy from Moscow University. She was editor-in-chief of the Kitabat Jadidah (New Writing), a series of books published by General Egyptian Book Organisation (GEBO), and is now director of GEBO’s series publishing prizewinning books in translation into Arabic.

She has published two collections of her own poetry, in 1997 and 1999. She has three novels, her debut novel Lahwu al-Abalisah in 2003 (reprinted 2005 and 2014) won the Egyptian Writers’ Union award for Best Novel for 2005, her second novel, Miss Egypt, came out in 2008 (reprinted 2014), and her third one, Rihlat al-Thiba’a in 2013 (reprinted in 2014). She has also translated children’s stories from Russian into Arabic, including stories by Pushkin and many other children’s stories, folktales and fairytales by Alexander Afanasyev.