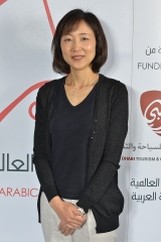 Kaoru Yamamoto is a Japanese academic, translator and researcher. Having received her PhD in Literature from Tokyo University of Foreign Studies, she lectures in Arabic language, literature and culture at several Japanese universities.

She has published many articles on both classical and modern Arabic literature, and has translated many works, including those of Emile Habiby, Rashid al-Daif and Abdul Rahman al-Abnudi, into Japanese. She was previously a research associate of the Research and Educational Project for Middle East and Islamic Studies at Tokyo University of Foreign Studies. Here she took charge of the translation team, which focuses on Arabic daily papers, and published a textbook on the translation of Media Arabic into Japanese.