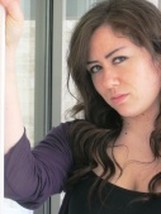 Jana Elhassan is a Lebanese novelist and journalist, born in 1985. She has worked in journalism and translation since 2009 and has published literary texts and short stories in a number of cultural periodicals. Her first novel, Forbidden Desires, was published in 2009 and won the Simon Hayek Prize in Batroun, northern Lebanon. Her novel Me, She and the Other Women was shortlisted for the International Prize for Arabic Fiction in 2013.