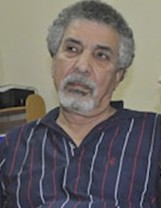 Moustafa Khalife was detained from 1982 to 1994 in the infamous Tadmur Prison in Syria for his membership of a radical left-wing opposition movement. His first novel al-Qawqa’a (The Shell), based upon this experience, was first published in French, La Coquille, by Actes Sud in 2007, and in 2008 in the Arabic original by Dar al-Adab in Beirut. See Banipal 50, pp. 179-83, for a review of a new edition of La Coquille.