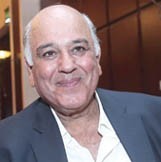 Rashad Abu Shawar was born in 1942 in Thikreen in Palestine.

He is a novelist, short story writer and journalist. Since 1970 he has published seven collections of short stories, six novels, four books of essays, two children’s books and one play. Some have been translated into several languages, including one novel into Russian and a short story collection into Farsi. He lives in Amman. In 1997 his collected short stories were published in Egypt.