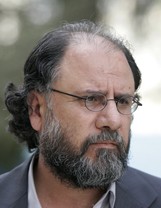 Saud Qubailat was born in the village of Melaih near Madaba in Jordan. He received his degree in Psychology from the University of Jordan in 1984.

In addition to his creative work, Saud serves on the editorial board of Afkar, the Jordanian Ministry of Culture Journal, and Awraq, the Jordanian Writers Association Journal. He is a columnist and prolific literary and political writer. His articles, essays and commentaries are published in local, regional, national, and international Arabic newspapers and magazines.