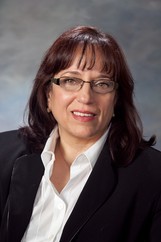 Nesreen Badi Akhtarkhavar was born in the city of Irbid, Jordan. She graduated with a Law degree from the University of Jordan in 1982, and received a Master’s in Criminology (1984) and Ph.D. in Multilingual Multi-Cultural Education from Florida State University in 1992.

Currently, she is the Director of Arabic Studies at DePaul University in Chicago, Illinois, where she teaches Arabic literature, translation, film, media, and culture. She is a member of the Jordanian Writers Society. Her collection of short stories Bayna al-‘Hudour wa al-Gheyab “Between Presence and Absence” published in Jordan in 2012 by Dar Ward. She translated the Jordanian Arabic novel, Anta Minthu al-Yaoum “You As of Today” by Tayseer al-Sboul published in 2012 with support from the Jordanian Writers Society, and Mashi “Walk”, by Saud Qubailat published in dual language by Dar Ward in 2012. She also translated with Anthony Lee Tayseer al- Sboul’s poetry collection; A’hzan Sa’hraweyah “Desert Sorrows” which will be in print by Michigan State University Press in spring 2015. She is currently working on the translation of al-Qet al-Lathi ‘Alamani al-Tayaran “The Cat That Taught Me How to Fly” by Hasheem Gharayibeh, and Kahfi “My Cave” by Saud Qubailat. In addition to translating Jordanian work, she is translating Rumi’s Arabic poems in collaboration with the American poet, Anthony Lee.

Dr. Akhtarkhavari’s creative essays and articles appeared in Afkar – the Journal of the Jordanian Ministry of Culture, al-Rai, al-Zamman, Mantis, Ezra, The Christian Science Monitor, and others. She received an award from the Jordanian Writers Society for her contribution to the translation and promotion of Jordanian literature.

Dr. Akhtarkhavari serves on numerous boards and civic organizations. She is the President of the World Engagement Institute, the Chair of the Amman Chicago Sister City International Education and Culture Committee, and member of the Board of Radius of Arab American Writers (RAWI).