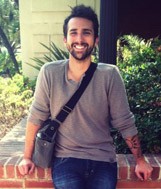 Robert J Farley is a translator and doctoral student of comparative literature at UCLA, focusing on Arabic literature and gender studies. Since his BA in Comparative World Literature at California State University, he has committed himself to mastering the language and is living in Amman as a Foreign Language and Area Studies Fellow for the 2013-14 academic year.