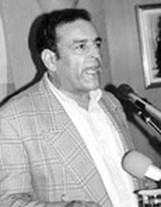 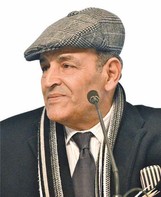 Moncef Ouhaibi, born in Hajib el-Ayounin, Kairouan, Tunisia on . He is a poet, writing in Arabic and French, a writer, and academic.

In April 2020 he was announced the winner of the 2020 Sheikh Zayed Book Award for Literature for his poetry collection (The Penultimate Cup), the first time the Literature Award has been made for poetry.

He is Professor of Arabic Literature at the Universities of Kairouan and Sousse and a permanent member of the Tunisian Academy of Sciences, Letters and Arts. He has published numerous poetry books in both Arabic and French, as well as writing short films and documentaries, notably En attendant Averroès (Waiting for Averroès), Paul Klee à Hammamet (Paul Klee in Hammamet), Devant les portes de Kairouan (Before the Gates of Kairouan), and Pays qui me ressemble (A country that looks like me), with selected translations into several languages.

His poetry collection Mitavizika wardat al Raml won the Abu al-Qassim al-Shaby Award in 1999. He has been nominated for several prizes including the Tunisian Comar d’Or literary prize, the Okaz Poet award for Arab poetry, and the Nikos Gatsos literary prize.