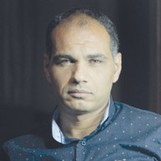 Dhia Jubaili is an Iraqi novelist and short story writer. He was born in Basra in 1977 and currently lives there. He is the author of ten novels.  His debut novel The Marquis Curse (2007), was awarded the 2007 Dubai Cultural Award, and his latest novel What Do We Do without Calvino? (2017) received the Tayeb Salih  Award. His short stories have appeared in anthologies and have been translated to English and Spanish.