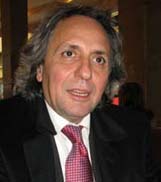 was born in Akar al-Atiqa, north Lebanon in 1955. He studied Music and Theatre at the Lebanese University, Beirut. One of his plays, Ru'ya [Vision] , was staged at the UNESCO theatre in Beirut in 2000. He has published four novels, Al-Tayoun (1988), Khirbat al-Niwah (1992), Ma'bar al-Alam (1998) and Hafat al-Nisyan (2007)[The Edge of Oblivion], the first volume of his trilogy Thulathiyat Abdul Jalil Ghazal, excerpted in Banipal 32.

He lives between Beirut and Dubai, where he is a presenter for  Al-Arabiyya TV’s Rowafid [Profiles] programme, interviewing cultural and artistic celebrities.